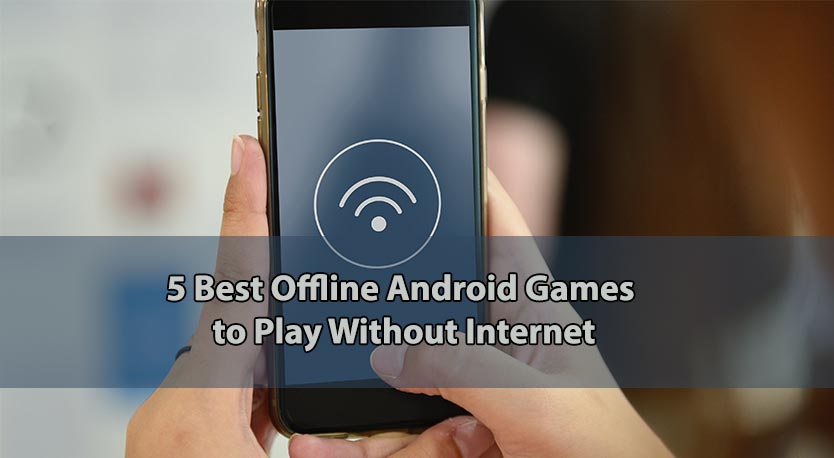 Nowadays, we are practically stuck with our phones in our hands. As long as we’re getting a decent internet connection, we’re usually on social media posting pictures, looking up people, sharing thoughts and so on. The problem, however, arises when we’re somewhere where the internet doesn’t work. What most people do is plan out their day, and if they have to be in such scenarios, they look up the first list of games and download it for hard times.

However, most of the time, they don’t have the time to play it before they’re stuck with poor or no internet connection, and then they realize that the game isn’t that good anyway.

So, with that in mind, we came up with a list of 5 best offline Android games that you’d love to play if you find yourself in such a situation!

Temple Run comprises of 7 characters, namely Guy Dangerous, Scarlett Fox, Barry Bones, Karma Lee, Montana Smith, Francisco Montoya and Zack Wonder. You have to choose one of the characters and go on a mission to find the Golden Idol with various hurdles in your way. You have to save yourself from demonic monkeys and collect coins and other perks along the way if you want to win.

The game is controlled by the swipe feature, i.e., swipe right to move right, swipe left to go left, swipe up to jump and swipe down to slide. Although it is easy to play, it goes without saying that the more coins you gather, the more upgrades you can access.

Subway Surfers was released in 2012 and has since broken many records. Similar to Temple Run, the charter has to run to avoid getting caught.

The game starts when a teenager is caught vandalizing the subway, and the policeman starts running after him, along with his dog. While running, you have to collect coins, and you can get the gifts that are placed in your way. You can use hoverboards to move faster, and the benefit is that you don’t die if you collide on the hoverboard. You can also use a jetpack to stay in the air for a limited amount of time in order to avoid the obstacles.

Fruit Ninja is one of the most popular and best offline Android games, that was released in September 2010.

In it, you have to slice the fruits that are thrown up and make sure that you don’t miss one because if you miss up to three, your game will be over. While it does sound pretty easy, it isn’t quite so, as you have to make sure you don’t slice any traps along with the fruit.

While playing Fruit Ninja, you get points for each fruit that you cut. If you slice fruits in pairs of 3, 4 or more, you get added bonuses for it. If you reach a 100 or any double zero figure, you get an extra life.

More so, the game has different modes such as Zen and Arcade, and each mode has its different perks. For example, you don’t get any bombs in Zen mode, but you have a limited amount of time.

Released in 2013, in Asphalt 8: Airborne, the player has four options to control, and you have to make sure that you win the race. If you do win the race, you’ll get rewarded with stars which can later be used to open other features of the game.

Since the release of the game, more than 300 million people have downloaded this game across all platforms.

Another cool feature in Asphalt is that you get more points if you perform a stunt and if you knock down your opponents. However, you need to finish the primary task first, and if you do that, you can go back and complete the secondary tasks as well.

To further enhance your experience, you can also make use of the nitro gas in order to perform stunts, and the longer you stay in the air, the more points you get. On top of that, Asphalt 8: Airborne also has different modes that you can unlock too, which makes it one of the very addictive, fun and best offline Android games you can play!

Badland is our 5th option of the best offline Android games. It was released in 2014, and in it, the player has to fly a clone around as the day progresses.

A day in Badland goes through all the phases, and as it transitions into noon, dusk an then night, different kinds of traps also emerge in the woods. The clone has to disable the machines that emerge as obstacles. However, after disabling them, they only remain dormant until the end of day one.

When the next day begins, it comes along with its own set of challenges, and so on. The more points you earn throughout the days, the more features of the game you can access.

While the game started as a single player game, the developer released the multiplayer feature as well, which allows up to four players to carry out the mission together.

So this is our list of 5 best offline Android games you can play without internet, and we recommend having them installed on your phone.

Even if you won’t jump into playing them right away, you never know when you’ll find yourself in the position of wanting to pass time and, without any internet or anything else to do, this is one of the most enjoyable ways to relax!

Catalina Smith is a young digital marketer by profession and is utterly obsessed with the growing technology. She has covered the online gaming world for over six years. She regularly posts at Dimble Games.

Last but not least, should you require our help after getting banned in any game, please feel free to check out our account unban service!