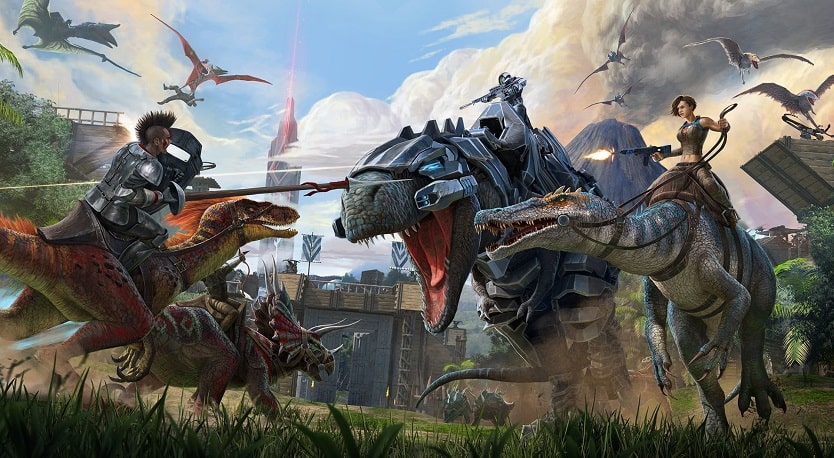 What is Ark: Survival Evolved?

Ark: Survival Evolved is a multiplayer “craft and survive” game you can play on the PC, PlayStation and XBox with mobile versions also available on various devices. The game was first playable on Steam’s Early Access programme in mid 2015 and was officially launched as a complete game in August 2017.

The main aim of the game is to survive in a world dominated by prehistoric creatures and other human players. Teaming up with other players is a great idea in order to defend yourselves against hungry carnivorous dinosaurs and angry herbivores. Ark: Survival Evolved contains hundreds of placeable building blocks, tools and weapons that when used properly can act as the perfect line of defence. Starting with nothing, the player has to scavenge the land around them looking for anything useful that can then be crafted into something useful.

To play the game you need to find an Ark: Survival Evolved server that has space available for you and your friends. By scanning through the server list in the game you can usually get a good feel for the server before joining. Many of the server names have abbreviations of the style that they play the game and the rules they enforce. Finding a server with the tag “RP” suggests that the inhabitants tend to “Role Play” which is a more serious style of game play. If you want to play Ark: Survival Evolved with others who want to act like the game is real then these servers could be ideal for you.

Once you find a game server that isn’t full you can then get started with establishing a base or joining up with other players who have already created their own fortification. To really immerse yourself in the role playing aspect of the game you need to interact with other players. You can usually find other players looking around for resources and engage in conversation with them either through the text chat or by voice if you have a microphone.

You will almost always find “RP” server players to be friendly but occasionally you will come across people who aren’t. “Griefers” are players that on there own or in packs try to make trouble for everyone else either by attacking them or there creations. Sometimes griefers come in a more advanced form and will attack the ecosystem of a server, causing everyone else to have a hard time finding resources or even wiping out important items/food completely.

Admins (players with overall control on the server) are almost always available on servers to govern what is going on. If you come across problems with the game and/or other players you can use the built in game chat on that server to ask for an admins help.

To get the most out of the role playing experience you could try watching videos on YouTube to get your head around what others do. A popular video series on YouTube is the Ark: Movie which is filmed within the game using in game actors playing the characters and voices. Watching this series could really help you get an idea of the role playing aspect in the game and understand some themes which could come in handy later.

Some servers may also disable fighting among players, these servers will almost always be tagged with “PVE” (players vs. enemies) in the server name. These servers are great for teamwork centric players as taking down some of the bigger creatures really does require more than one player.

If you don’t like idea of joining Ark: Survival Evolved servers owned and controlled by other people you may entertain the idea of creating your own. Ark server hosting companies like Survival Servers provide the infrastructure and maintenance needed to support your own game server. The cost of Ark server hosting from this company starts at only $13 a month according to the CompareGameHosting Ark page for 20 slots (maximum of 20 connected players at one time).

To get a better understanding of the service provided by game hosting companies you should also look into the reviews for them. Using Survival Servers as an example again you can find reviews for them on several websites, such as CompareGameHosting and TrustPilot.

The things to look for in a game host company include details like uptime, stability, modding and support. A lot of game hosting companies will ignore or delay support tickets for so long the support is near non existent. Stability and uptime are really important to ensure you get value for money, it’s no good having a game server that you can’t use. Modding support is more of a modern aspect that is included as standard with most hosts nowadays, most people like to play Ark: Survival Evolved with game modding enabled.

Usually you will find that the cheaper suppliers may not have the best reviews. You need to compare the level of service you can expect to get against the price and work out if you think it represents value for money. A cheaper host usually makes sacrifices to support to cut down on costs which can mean that you are waiting days for a response to a problem that may be causing you Ark server to not be live and playable. Some game hosting companies are able to offer cheap prices because they buy the machines they rent out in bulk and pass the savings onto their customers.

Jennifer H. works for CompareGameHosting and is an avid player of Ark: Survival Evolved on hosted servers.