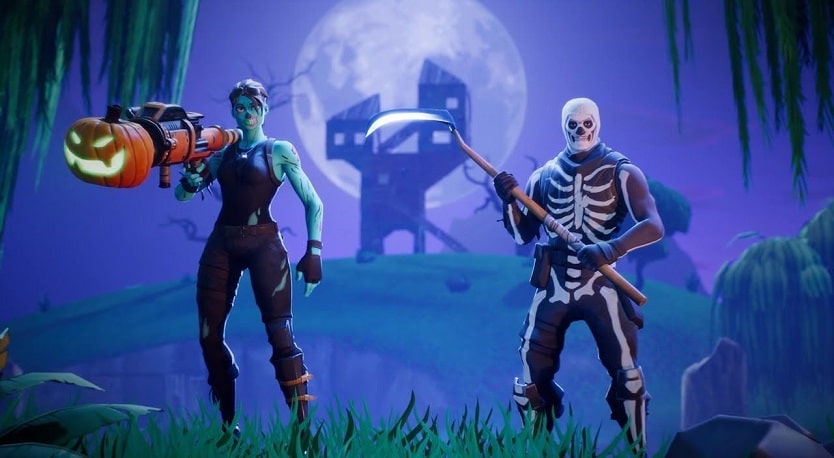 To a lot of people October only means one thing: Halloween. Even the video game world isn’t left out anymore, with live updates from developers bringing terrifying Halloween themed content to the big three of Battle Royale: Apex Legends, Fortnite and PUBG.

Looking first at Apex Legends’ Halloween event ‘Fight or Fright’, its plain to see that the developers wanted to engage the player base in an undead themed new game mode titled ‘Shadowfall’ complete with exclusive skins to match.

In Shadowfall, you can expect to be dropped into Kings Canyon at night, where you and 33 other players will battle it out. This is Halloween though, so when any player dies they are going to be added to the ranks of the undead shadow squad, where they will play as an undead version of their legend.

These undead legends will have no weapons, no abilities and obviously, no chance to win. What they WILL have however, is increased movement and jump abilities, a much stronger melee attack, the ability to scale walls and unlimited respawns. Its going to be shadow squads only goal to stop the last ten living legends from reaching their evacuation transport by any means necessary – meaning that the last ten players are going to have to fight off a zombie hoard of Apex Legends.

The game mode was announced by Respawn with the mysterious information that the event is being hosted in game by a ‘mysterious figure’. Fans are speculating that the figure in question is the recently leaked character Revenant – but only time will tell.

Respawn also announced a range of cosmetic additions to the Halloween ‘Fight or Fright’ event, with legendary skins announced for the Devotion and the Alternator, as well as legendary skins for Gibraltar, Caustic and Crypto.

Fans will also be pleased to learn that Respawn listened to feedback from the last Apex Legends event and have updated the ways in which players can earn these exclusive in game items, with timed challenges allowing players to earn the event exclusive loot rather than reaching for their wallet straight away.

Speaking of skins, Fortnite is yet to formally announce the annual ‘Fortnitemares’ event. Expected to feature brand new monstrous skins and possibly new game modes Fortnitemares should be a lot of fun for players whilst we wait for Season 11. Who knows what new mechanics Fortnitemares could bring – don’t forget that Fortnitemares is actually where the first instance of an AI enemy was used in the PVP favourite.

Whilst its yet to be formally announced, players can expect Fortnitemares to drop close to Halloween itself, with the usual pre event teasers littered around the map for players to find as they battle it out.

Player Unknown Battlegrounds is also set to receive Halloween content this year, with their themed skins already announced via their official YouTube channel. Players will be able to dress their character as a pirate, a skeleton or (bizarrely) Dorothy, the Tin Man, the Cowardly Lion or the Scarecrow from the Wizard of Oz.

With no actual themed Halloween game mode though, PUBG is by far the most disappointing Battle Royale game this Halloween. Despite that, we can expect to terrify ourselves in Apex Legends with Fight or Fright and in Fortnitemares as well – so no matter which of the big three you enjoy most when it comes to Battle Royale, there is going to be something spooky added for you to enjoy.

Mike is an avid gamer and author, who uses his skills to write about all the latest gaming and PC tech news at WePC.com. Aside from Gaming and writing, he also loves music – He just wishes there were enough hours in the day for all three.

We're here to give you the best help in order to get your Battle Royale account unbanned!