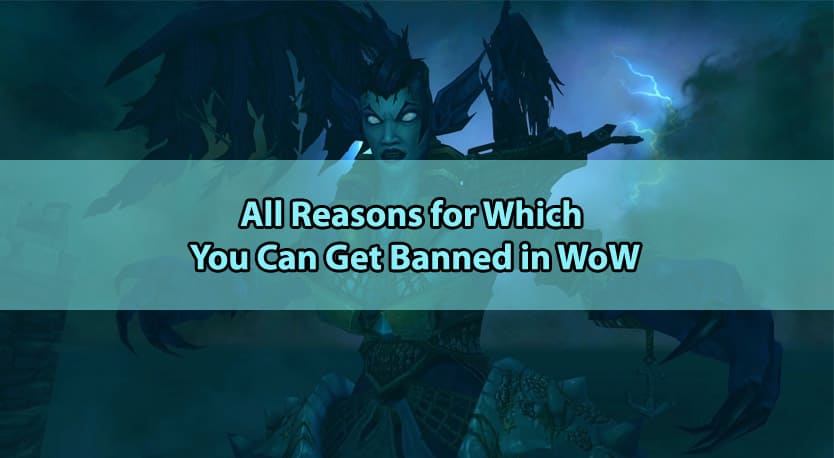 World of Warcraft is not only the most popular MMOs out there, but it’s also one of the most popular games for some developers to create cheats and bots for, as the “safest” ones to use are constantly at a high demand.

Although everybody has their own opinion about botting in WoW, this is, ultimately, the most popular reason for which you can get banned from WoW, and it basically splits in two categories, namely:

Reasons for Which You Can Get Banned from WoW

Regardless of which of the above-mentioned two types of botting players took part in, Blizzard has treated them equally when it came to WoW ban waves, slamming them with the same 6 months of suspension for their prior offense, followed by 18 months for repeat offenders, as well as a permanent ban for the 3rd time around. Naturally, there were some exceptions to the rule as well, where some players got permanently banned straight up from their very first time using a bot.

That being said, ever since one of the most popular WoW third party software, Honorbuddy bot, has been shut down, there was quite a drought of WoW ban waves, and overall, very few people that were lately getting banned from WoW.

Usually, when something shuts down, especially online, others emerge, but due to the circumstances in which Honorboddy has been closed, following a lawsuit from Blizzard, it’s understandable why other developers are reluctant in getting into that spotlight.

Now, getting back on our subject, let’s see the most popular reasons for which you can get banned from WoW, and why and when do WoW bans come in waves!

Why do WoW Bans come in Waves?

As per Blizzard’s policy, which lately is being applied by many other gaming companies, they try to gather as much information about how a particular cheat and bot works, without banning the very first players they see engaging in its usage. If they were to ban the players the moment they’d spot them using a bot, the botting software would get updated by its developers really fast after the fact, and they’d have to rewrite their detection algorithm form scratch once again, and so on.

Because of the wave banning, they not only gather all the info they can about the bot’s engine, patterns and routines in various circumstances or encounters, but they also manage to catch as many players as possible who are using it. Since popular bots have their very own forums, their users report the bans really fast, and thus, would help others to stop using it for the time being, and so potentially dodge a ban.

More so, banning in waves also has a much more efficient impact on the community as well, for both its users and the regular players. It’s one thing to find out that “some guy” who was always online on your server got banned from WoW, and a whole different one to learn that 3 whole guilds on your realm got banned, or that the ban wave hit thousands of WoW players.

On top of that, the larger a WoW ban wave is and the more players get banned from WoW, the more attention it gets, reaching communities and news sites that would otherwise never hear about it had the number of banned players be smaller. Also, the numbers alone make some players think twice before considering to use a bot, even for something as little as order hall missions or fishing, since in the Warden’s (WoW’s cheat detection software) eyes, it’s just as bad as any other type of third party usage.

Having this said, let’s move on to the next question about getting banned from WoW!

When do WoW Bans come in Waves?

Apart from the obvious one, which we mentioned above, namely third party usage and bots, here are the type of WoW bans that can be sent out in waves:

As far as the WoW bans that don’t really come in waves, these are mostly triggered by player reports as opposed to other detection methods, but among them, you can find:

Did we forget any? Oh yes, false positives! Although many players believe this is a myth, it is, in fact, real, and it’s a very possible reason for which you can get banned from WoW. Whether you’ve been at the wrong place at the wrong time, or whether you’ve traded something to someone who was flagged.

Over the years, we’ve encountered multiple players who got banned from WoW due to false positives, and we’re proud to say that we were able to help them, thanks to our WoW unban service! Here’s how the unban confirmation looks like! 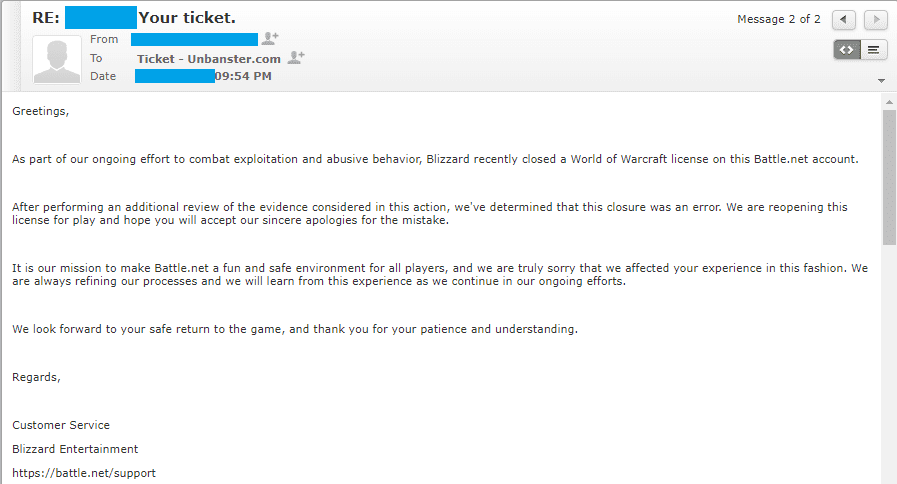 So this is it, all the reasons for which you can get banned from WoW, or at least the most popular ones, as the ever clever players are constantly on the look for how to bypass certain things, whether out of curiosity, exploration or just to get an unfair advantage!