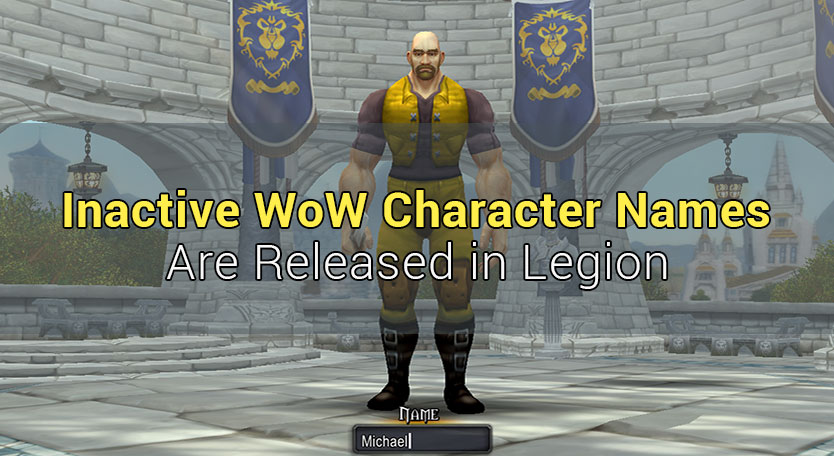 Up until recently, there was a common practice among players to contact Blizzard Support in the hope of having a character name released so they can take it for themselves. That is not the case anymore, as Blizzard is now releasing all inactive names around a new expansion’s launch.

Even though this was in place since Warlords of Draenor, GMs would still assist every now and then with releasing a requested inactive name, however, this is the most safe way to secure a name you wanted for so long, if it is indeed inactive.

According to the WoD name release post, in order to preserve your own character names, all you need to do is log into the game on the characters whose name you want to keep both before and after a major content patch and/or expansion.

In the current situation, to make sure your character names aren’t released, you need to log on them before Legion’s release (meaning pretty much right now), and afterwards, just to be sure.

However, if your name does get released because of inactivity, don’t panic. Your character will NOT be deleted, and you’ll just see a “free name change” screen pop up whenever you try to log on that character. Chances are, nobody has taken your name yet, so the first thing you should try is to get your old name back!

How to get an awesome character name for Legion

Well, first of all, you need to make sure you’ve got at least a few minutes to do this right after Legion is released, which is on the 30th of August.

Secondly, you want to already have a list of names you want to get, so you don’t waste time thinking of them when you should be typing them in as fast as you can.

Thirdly, you should try to filter out the names that have basically no chance of being released, by checking them on both the WoW Armory and WoWProgress.

For instance, we want to check the character name “Michael” on US-Illidan.

The above mentioned character name and realm were randomly selected.

The goal is to find a name that’s unavailable on both the WoW Armory and WoWProgress, and that’s the name you’d want to write down on the list and try at night. Of course, not all such names will be freed because there might be other criteria as well, preventing the name to be released, and then again, it might be worth even testing a few names that seem active, just in case.

Since many accounts have been inactive for years, with basically no hope of ever coming back, it’s only fair for Blizzard to release the names which are currently kept by those accounts for the current and new players.

This is also quite a great incentive to play different characters, as some players lack motivation due to not being able to find a nice name. On top of that, if you’re playing on a populated server, trying to find a suitable name, let alone a cool one, can be very frustrating, time consuming and even impossible most of the time.

I hope you guys found this post useful, and let us know in the comments which cool names you’ve managed to snatch!