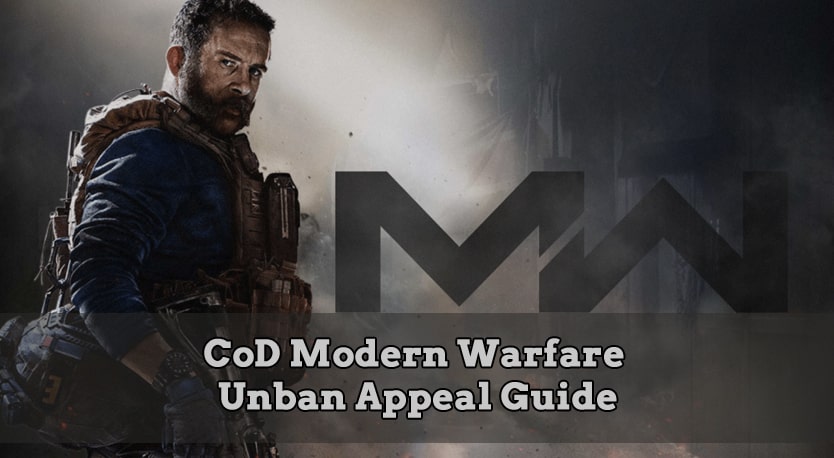 In this post, we’ll go over what you can do in order to get unbanned from CoD Modern Warfare, should you ever find yourself in this unfortunate situation.

Being relevant in this niche isn’t easy, especially with contenders as popular as CSGO and CrossFire, especially when, to a degree, CoD Modern Warfare is competing against Battlefield V and even Apex Legends!

Regardless, Call of Duty: Modern Warfare is definitely here to stay, learning a lot of valuable lessons from CoD: Black Ops 4, addressing a larger playerbase and even adding a campaign mode to it on top of the plenty multiplayer game modes!

Now, as we all know, FPS and competitive multiplayer games are extremely serious when it comes to players they suspect of breaking the rules, and thus, are quick to issue account bans when they believe that’s the case.

It is with that in mind that we’ve decided to cover this quick yet step by step guide on how to appeal a ban should you somehow find yourself banned in CoD Modern Warfare.

However, first, we should go over the things that could result in getting banned from Call of Duty: Modern Warfare, so you know what to avoid in order to protect your account!

What can get you banned from CoD Modern Warfare?

The most known and common reason when it comes to getting banned from a FPS game such as Modern Warfare or even others in the genre such as PUBG, Overwatch, Fortnite and the ones we mentioned above, is auto aiming through third party software.

Apart from aim-botting, here are a few other common reasons, as per Activision’s Terms of Use, for which a player could get his CoD Modern Warfare account banned, offenses we cannot assist with if the ban is legitimate:

Bottom line is, as long as you keep clear of the above mentioned, you should be golden, although there are cases of false positive bans, so with that in mind, let’s get to the next part of the guide, namely how to appeal to get unbanned from CoD Modern Warfare should you find yourself in that position!

How to submit a CoD Modern Warfare unban appeal

The entire Call of Duty: Modern Warfare unban appeal will take place on Activision’s Support Center here, so that’s where we need to be to being the process.

Once you’re here, select your platform in question (such as Windows in our example), followed by “Accounts” as the Topic, and “I’m having a problem that’s not listed” under the Issue.

This will prompt a suggested solution, which will be “Submit a ticket“, and this is where we need to click to being our CoD Modern Warfare unban appeal.

Once you’ve clicked on it, you’ll be prompted to log into your account, and then you’ll finally arrive on the actual CoD Modern Warfare account unban appeal form.

This where the actual ban appeal takes place, and that’s also where we can help you better word your ticket based on your case’s circumstances, should you require our customized and professional unban service for Modern Warfare, designed to get you unbanned from Call of Duty: Modern Warfare.

Now that everything is done, simply press “Submit”, and your Call of Duty: Modern Warfare account unban appeal will be sent to Support! Make sure to keep an eye on your e-mail, as that’s where you’re going to receive the answer. Best of luck!