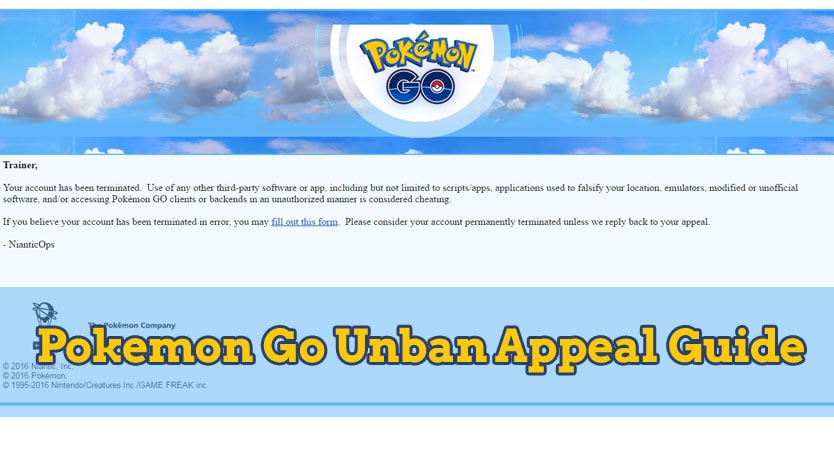 In this article, we’ll cover how to submit a Pokemon Go ban appeal in order to get unbanned from Pokemon Go and go back to your daily hunts!

There’s no secret that Pokemon Go is one of the most popular games ever created, especially for mobile. However and quite naturally, as with every popular game, to protect its community and the fair play, Niantic is taking cheating very seriously, issuing quite some large Pokemon Go ban waves.

As we very well know, the larger the ban wave, the more chances for false positives to happen, and as usual, quite a few players will end up banned unfairly.

With that in mind, we decided to cover this step by step guide on how to submit a Pokemon Go unban appeal, in the unfortunate event of getting banned from Pokemon Go.

Before we get into it, let’s go over the reason for which you can get banned from Pokemon Go.

What Can Get You Banned from Pokemon Go?

Here are the most common reasons for which a player can end up banned in Pokemon Go:

Although some of you might believe that using a VPN to play Pokemon Go is a bannable offense, you’d be happy to hear that it isn’t.

As long as you’re not changing the actual GPS coordinates, you’re safe to play behind a VPN.

Regardless, if you’d like to check the entire list of reasons that can lead to a Pokemon Go ban, here are Niantic’s Player Guidelines.

As you might already know, there are 2 types of bans you can receive in Pokemon Go, namely a soft ban (or catch flee ban), and a temporary or permanent Pokemon Go account ban.

Both the soft ban and catch flee ban merely prevent you from doing certain things in game, for a while, such as catching Pokemons or spinning PokeStops.

Although some time ago you were able to remove your own soft ban by spinning PokeStops for a bit, all you need to do nowadays is wait it out. That can take somewhere between a few hours to a day.

On the other hand, a suspension or permanent account ban are basically restrictions from being able to log into Pokemon Go altogether for a while or permanently.

In this regard, Niantic also implemented a penalty escalation system, designed to help players reform before losing their Pokemon Go account.

Below we’ll go over how the new punishment system works.

For the very first offense, you’ll receive a Pokemon Go warning, which you’ll see when opening the game.

This comes as a result for most of the ban reasons, including cheating. However, there are cases where you can end up permanently banned from Pokemon Go without any prior warnings. This can happen in cases of hate speech.

The first strike, the Pokemon Go warning will last for a maximum of 7 days, and it might carry the following consequences:

After the warning goes away, everything will get back to normal regarding your gameplay. You’ll be able to see Pokemons and receive raid passes.

However, keep in mind that if you engage in the same behavior that got you warned for in the first place, you’re looking at a Pokemon Go suspension going forward.

If a player doesn’t reform after their first warning, the next stop will be a Pokemon Go account suspension.

Unlike the warning, this prevents you from being able to log into to the game and play altogether.

A suspension in Pokemon Go account is temporary, lasting for 30 days.

However, unlike the warning, you can submit a Pokemon Go ban appeal for it, even if it’s just a temporary suspension. The process is the same as the one for permanent ban appeals.

And, if you engage in the same activities that got you warned and suspended, you’ll get permanently banned from Pokemon Go.

Regardless of the offenses, a third violation of the Trainer Guidelines will result in account termination. As in, even if you got warned and suspended for spoofing, but your third offense is an emulator, you’ll still get banned.

The duration of it is, well, permanent.

Nonetheless, if you are permanently banned, you can and should submit a Pokemon Go ban appeal, as there are chances to have your ban overturned.

That said, let’s first see whether or not you can unban a Pokemon Go account!

Get Unbanned from Pokemon Go!

This is one of the most asked questions, whether or not you can unban a Pokemon Go account.

To answer it, yes, you can get unbanned from Pokemon Go, although that depends on a few circumstances.

For example, if you got banned for hate speech or racial slurs (such as for your Pokemon or Trainer names), the chances of recovering that Pokemon Go account are very small to none.

On the other hand, if you’ve been restricted under the allegation of cheating (spoofing, emulators and such), you stand a much higher chance of success.

You see, a lot of the bans are not issued correctly from the get-go. Certain mobile devices can have GPS issues and can make you show up, even for a second, in an entirely different country, then back in yours. That can lead to a strike or even a ban. On top of that, Niantic doesn’t always follow their three-strike discipline policy.

In that regard, there’s quite a bit of wiggle room when it comes to submitting a Pokemon Go ban appeal, especially if the ban came as a result of a false positive.

So, bottom line is, whether you’re getting your permanent Pokemon Go ban removed altogether or just changed to a temporary suspension, you can indeed get unbanned from Pokemon Go.

The entire Pokemon Go ban appeal form will take place on the Niantic Support website, so make sure you get on it.

Once you’re there, you need to complete it as such:

Once you’ve completed the form for your Pokemon Go unban appeal, press the Submit button, and your ticket will be sent to Niantic Support!

Now all that’s left to do now is wait until Niantic reviews your Pokemon Go ban appeal and get back to you with their reply via mail. As a hint though, make sure to check the Spam folder as well!

Want to get unbanned from Pokemon Go?