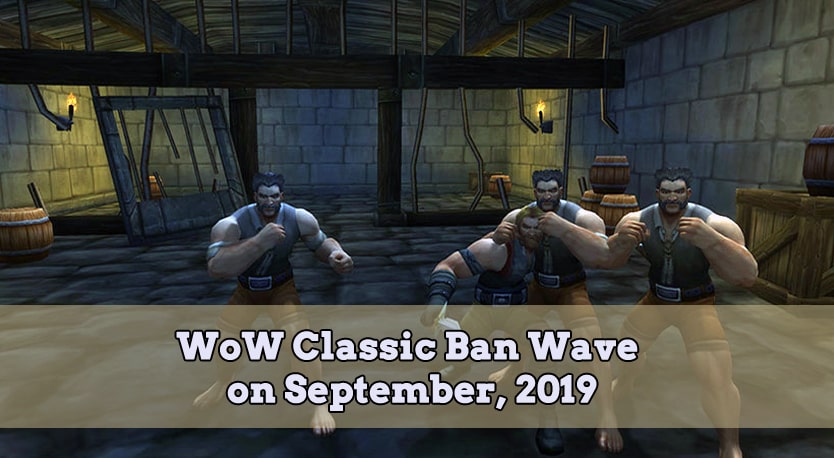 It seems that Blizzard has issued its first ever WoW Classic ban wave today, specifically for allegations of third party usage, commonly known as bots.

This really goes to show how seriously Blizzard takes cheating and botting in WoW Classic, as this current and first ban wave happened merely 3 weeks after release. That’s of course not to say that they haven’t banned players so far in WoW Classic, especially for account sharing and buying boosts, albeit not in a ban wave style, except for maybe if you count the layering exploit bans.

Now, just yesterday we wrote a post about 10 things to do in WoW Classic at level 60, but it seems that some players would like to take a shortcut when it comes to grinding, which is what happened in the real deal WoW Vanilla as well back in the day, with the Glider bot.

Although we won’t disclose the third party software in question, as it’s also unsure at this point which, if any particular bot caused this (since certain autoclickers were affected as well), it seems that Blizzard cares just as much about PvP and PvE combat rotation bots as they do with grinding and fishing bots.

To go over their purpose, what grinding and fishing bots do is that they’re designed to either farm herbs, mines or fish, thus having quite a large impact on a realm’s economy and supply, where other players could not keep up with it by farming legitimately.

Meanwhile, the PvP and PvE combat rotation bots are designed to replicate the perfect possible rotation for your class in any of these two environments, as in, against other players or raid, dungeon or quest encounters.

Essentially, while some are more “gamebreaking” than others, it’s sure that regardless of which of these a player would use, it would give them quite an unfair advantage over other legitimate players, and Blizzard wants to ensure that won’t happen.

Although for what Blizzard deems to be lesser offenses, such as account sharing or boosting, they’ve issued 30 days of suspension, for whis current WoW Classic botting ban wave they’ve issued 6 months of time off right off the bat, as per their new penalty volcano.

What this means is that if a player is caught using a bot in WoW Classic, he’ll be suspended for 6 months, and allowed to resume playing once the suspension is served, although if the offense repeats, the next suspension will be for 18 months. A third offense would result in a permanent ban, however.

Will a Ban in WoW Classic Affect Retail WoW?

No, unless you’ve been banned for something extreme, which would likely get your entire Battle.net account banned, a ban in WoW Classic won’t affect your WoW Retail account, unless of course, the ban reason includes that particular account as well.

Well, I guess it’s safe to say that at least for the time being, if you decide on using any software against WoW’s Terms of Use, regardless of it being for fishing, PvP, PvE, leveling or farming, you’ll be in for a certain ban.

One of our many happy customers, in a similar situation! (click to zoom the image)/center>