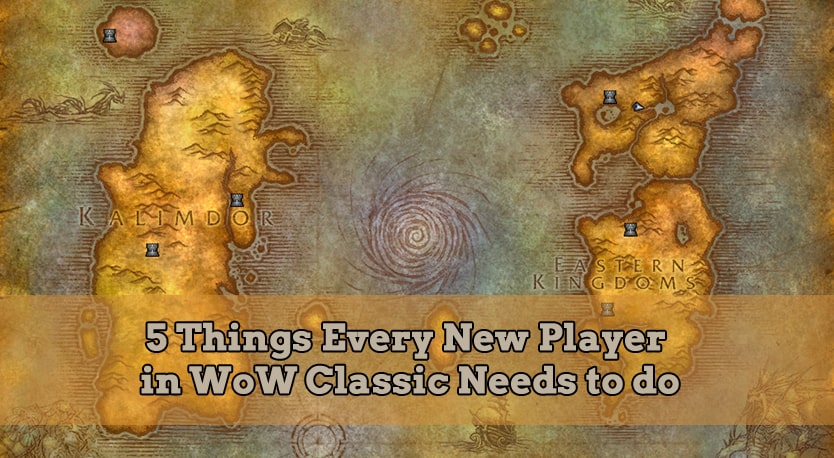 Even now, a month after WoW Classic went live, Blizzard’s servers are fit to burst with the sheer amount of players looking to relive the original World of Warcraft experience. A large amount of these players are riding high on nostalgia, recreating their original characters on a server and replaying the same quests they would have done in 2004, at the original release.

These players are lucky. Lots of newer WoW fans will not know what to expect when entering Azeroth in its original state – modern World of Warcraft is vastly different from its 2004 state following all the changes the various expansions have had to the game over the years.

So, for those newer players confused by the classic Warcraft, here are five things you should definitely be doing when you log into WoW Classic.

Consider Your Race and Class

Modern WoW allows players a lot more freedom when it comes to choosing race and class than its Classic counterpart. As well as this new freedom, there are more races available in the modern build thanks to expansions – with WoW Classic only offering the original eight races.

The choice of player race is important, as in Classic WoW classes are restricted per race. This means that certain races won’t be allowed to play as certain classes – Tauren’s, for example, cannot play as warlocks but are the only Horde race able to play a druid.

When you are creating your character and picking your race, keep this in mind. What are you looking for from your play experience? To deal DPS? Support other players with healing? Or just to immerse yourself in the world? These choices are going to define what class you play as, so make sure to know what you want from your WoW Classic experience before you finalize your character creation.

Again, modern World of Warcraft differs vastly from its 2004 state. Nowadays solo play is common, and for a lot of players the preferred way to experience the game. Features like the dungeon finder have streamlined and quickened the process of forming groups for dungeons and instances, quests are easier with map markers and scaled leveling, and players can re-spec their character easily to suit whatever situation they need.

Not the case in WoW Classic. If you want to form a dungeon group, then you had better interact with other players in the chat. Looking to level quickly? Approach other similarly leveled characters to see if they want to form a group and take on a quest line with you, as questing is much harder in Classic. Need help to heal because you have chosen a DPS build? You guessed it, talk to other players.

WoW Classic goes back to the roots of what made Warcraft the MMORPG titan it became – with an emphasis on multiplayer. Play nice with others, and you are going to have a much better and easier experience in the game world, with a player base that is just as enthused and excited to play with you as you are with them – reputation is everything in a dedicated online community.

Keep in mind, a banned retail license won’t prevent you from playing Classic. But, here’s how to appeal a WoW account closure nonetheless.

Modern WoW has been nerfed to a very comfortable degree, and players familiar with the current WoW difficulty level are going to find their character getting killed again and again if they approach quests the same way they do in the contemporary game.

Scaled leveling is gone, meaning that different game areas have enemies targeted at different leveled players, rather than having enemies match your current level as in the modern game. Player health regenerates slowly and only out of combat, so make sure that you have plenty of food in your inventory to heal between battles (and water for your mana).

Gold is much harder to come by as well, so make sure you are saving up (your first mount is going to cost 100 gold alone). Try taking up some of the in-game professions to earn extra gold whilst you are out questing, as you are going to need it. Skinning, mining or even herbalism are great ways to earn a little extra on the side as you journey through Azeroth.

And, of course, avoid cheating, as that’s taken just as seriously as on retail, and it can lead to your WoW Classic account to get banned.

It’s easy for newer players of WoW to ignore or not even understand some features of modern WoW because of the convenience of the modern game. Classic WoW is the lesson they need to learn just why these features exist.

One of the features I am talking about is the resting bonus. It’s vital in Classic WoW to ensure that when you log out, your character is inside an Inn. This is going to give you an all-important double XP boost – which is invaluable when you consider how long leveling takes in Classic mode. This leads right on to the hearthstone – it has a 60 minute cooldown time in WoW classic, much higher than its contemporary counterpart. Use it sparingly, as its an invaluable way to end a play session quickly – and at the inn of your choice.

Things like using the road to travel instead of wandering into the wild as it helps you to avoid higher level fights you know are going to kill your character, making sure that you know to take up the first aid secondary profession to make vital bandages, that you should repair your equipment regularly – little things that are going to make your playthrough of WoW Classic so much easier, yet may have become irrelevant in the more modern build.

This is the most important advice any new player can take into the game. World of Warcraft Classic version is big, tough by nature, and a lot more immersive than you might remember (or imagine!).

Don’t get put off by difficulty spikes – make friends, explore the world, lose yourself in the story and you are going to find that WoW Classic is worth every inch of the praise it garners from the loyal fan community who have demanded it for so long, and finally get to enjoy it.

Have you got any other tips for newbie players in WoW Classic? Be sure to post them below so that everyone getting into Azeroth can be off to the best start possible!

Mike is an avid gamer and author, who uses his skills to write about all the latest gaming and PC tech news at WePC.com. Aside from Gaming and writing, he also loves music –  He just wishes there were enough hours in the day for all three.