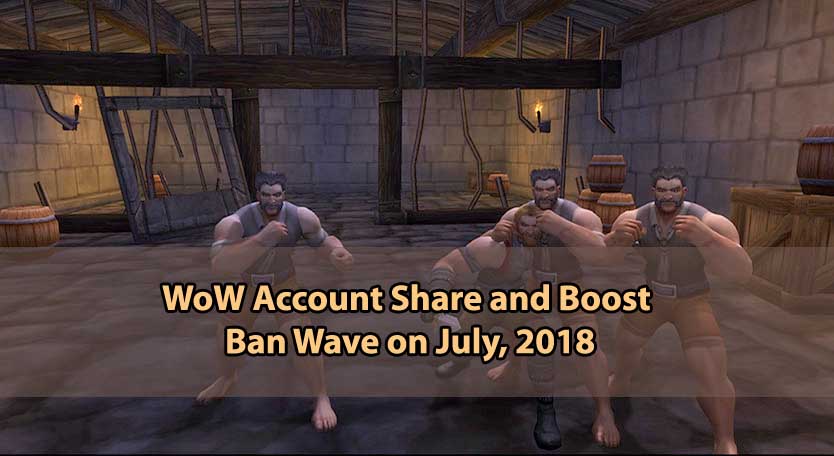 Well, a couple of days ago, I wrote a post about the reasons for which you can get banned from WoW, and where I mentioned that there’s been some time since the last WoW ban wave. Anyway, it seems that I jinxed it, as currently, there’s an on-going WoW account share and boost ban wave. Sorry. :/

For a few days now, Blizzard is cracking down on players that are either sharing their WoW accounts or purchasing boosts. By boosts, I mean anything related to PvP/PvE, such as arena or RBG rating, powerleveling, mage tower challenges, mythic plus dungeons, achievements, quests, mounts and so on. Pretty much anything that can be sold boost-wise, and especially anything that requires you to hand your WoW account to someone else in order for this to happen. Thus, WoW account sharing.

A bit unlikely though, but the most predominant penalties that Blizzard is issuing for these alleged offenses are suspensions for 30 days, just in time for Battle for Azeroth’s launch (August 14). However, “repeat offenders”, meaning players that have been suspended before, have been slammed with suspensions for up to 6 months.

Here’s the mail sent out by Blizzard to the affected players:

This account has been suspended because a player on this account used a different game account to take part in exploitative play. Your game license is not available for play during this time. Sharing your account, or accessing other player’s account, violates the World of Warcraft Code of Conduct and Terms of Use: https://www.blizzard.com/company/about/termsofuse.html

Along with this suspension, we may remove currencies, inventory and/or ranking/qualifications associated with the account involved in this exploitive behavior.

As the account holder, you are responsible for the activity associated with this game license. Further violations will result in harsher suspensions or permanent closure.

We don’t take this decision lightly. Our team issued this suspension only after a careful review of relevant evidence. Our support staff will not overturn this penalty and may not respond to appeals.

Straight forward typical Blizzard mail, except it isn’t really straight forward at all. In fact, the alleged violation, namely “unauthorized account access”, actually makes you believe that your WoW account has been hacked into, rather than summarizing what the ban is actually for. More so, some of the affected players haven’t partaken into these things for weeks, if not months, and thus, completely forgot about it until now, for which the ban reason would make even less sense.

That being said, it seems that Blizzard were already flagging accounts for a while now, and just now decided to smash the targeted players, leaving them with virtually no time to re-earn the rewards or achievements in question.

The thing is, a lot of the affected players state that the only reason for which they got banned was due to using a VPN while playing WoW (for legitimate reasons), or for simply logging into WoW from a different computer or laptop, without actually breaking the rules. This is in fact something that is very likely to happen, especially nowadays when everyone is pushing to earn achievements and unobtainable rewards. That, cumulated with the IP discrepancy from a VPN or different computer can indeed flag your account as being shared.

So, without blaming the boosting companies, I’d recommend being careful if you’re actually considering on purchasing a boost, especially right now, as it can get your WoW account banned, along with having all the rewards or achievements obtained through the boost removed.

Last but not least, should you require our help, please don’t hesitate to check out our WoW unban service in order to submit a WoW ban appeal!