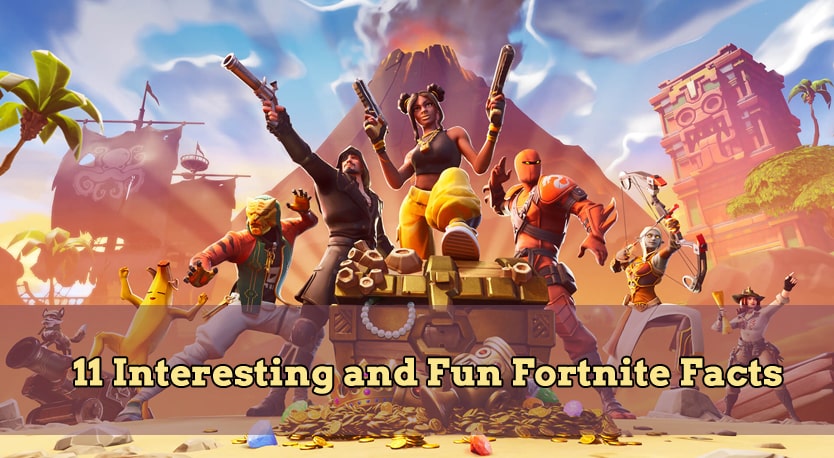 Fortnite is one of the most popular games in the world right now, and it’s definitely the most played battle royale game at this time. Its Unreal Engine base, combined with simple graphics and low system requirements make it playable on a huge variety of devices. And to make this even better, Fortnite is also available on mobile.

The game managed to take the world by storm, continuing to impress a lot of people with just how fun and simple it is to play! Here you can find some great facts about Fortnite and how it has evolved into one of the top games in the world right now.

The game has more than 200 million accounts

That’s amazing, and it clearly shows the popularity that Fortnite has and how much it has managed to evolve. On PC alone the game has 70+ million players, so most of the accounts are on mobile. The ease of use, combined with creative controls and a plethora of other features really makes Fortnite an incredible game to play. Plus, it can be good for casuals and for the more competitive people out there too. Which is exactly what makes it such an incredible game to play, as you can always find someone to match your skills.

On top of that, you should know that Epic Games also has a great Support department, despite their extremely large number of players. They always do their best to assist players, whether with in-game issues or when appealing to get unbanned from Fortnite.

It might sound crazy, but it’s very well the world we live in. There are people willing to pay good money just to have someone help improve their kid’s money in Fortnite. This says a lot about how much parents are willing to help their kids. And it also shows the phenomenon that Fortnite has become in just a few years.

An amateur player won $3 million at the Fortnite world cup

The player named Bugha is widely known for being the only person in the world who actually got to win it big at the Fortnite world cup. A lot of people won lots of money in Fortnite, but he is definitely one of the people that won the most here. It’s a testament that this is a game where you can easily make a lot of money if you monetize it correctly.

Speaking of large prize pools, you might want to check our list of fun League of Legends facts too!

Recon Expert is one of the rarest skins in the game

If you are interested in how rare some skins are in Fortnite, then you will notice many of them are super rare. Recon Expert is very rare because not a lot of people bought skins at the beginning of the Fortnite days, and now only a select few people have it.

Yes, initially Fortnite was created as a building game with a horde mode implemented in it. The sheer idea was a lot of fun and that Save the World component is still in the game, although obviously not super popular. But it goes to show that if you do implement the right ideas correctly, it might end up being very helpful. No one expected battle royale to be a hit in Fortnite at first.

The game took 6 years to develop and release, with battle royale being an afterthought

Epic Games first announced Fortnite back in 2011. So the mechanics were quite rough at that time, but they were present and the game did exist well before the battle royale craze. Which is great, as it shows the evolution of the title and how everything added up together quite nicely to where the game is today.

Ninja and Drake played Fortnite in front of 628000 people

This is the record holder to the most audience members on Twitch for a single stream. Ninja played with Drake, Travis Scott and Juju Smith Schuster. Adding in mainstream celebrities from music and sports was an instant hit, and the clear fact that hundreds of thousands of people tuned in to see that stream is a record up to this date.

Floss is one of the most popular dances in gaming

There are many celebratory dances in Fortnite, but floss is by far one of the most popular. It’s so popular to the point that it started to be used in real life. And many kids actually use the floss at school, at home and so on!

Even if it’s a mod, it’s cool to see that you can actually enjoy and have fun being a giant in a miniature map. It’s pretty funny, and you can check it out at 5320-7315-4181. You can be as creative as you want in Fortnite, and this is a clear example of just how unique and different the entire game can be to begin with.

This is a clear testament to how powerful and also super popular the game has actually become. It really is something significant and super interesting, unlike anything out there. If you are very passionate about battle royale games here you can find a match without worries and you can enjoy quite a significant set of new mechanics and seasons coming all the time. It’s really different and fun, exactly what you want to expect from a good and funny game.

There are Fornite inspired sneakers

Josh Hart from the LA Lakers chose to wear footwear with Fornite characters on it. So not only is the game insanely popular, but you actually get to have sneakers with these characters on them, which is surreal on so many levels!

Fortnite continues to be a hit despite Apex Legends getting some of the market share. Yet despite the Apex approach, Fortnite continues to reign supreme in the battle royale world and it will impress you with its unique ideas, tons of content and the fact that it’s constantly evolving. There’s always something new and different to be found in Fortnite, and it makes you play more and more. It’s easy to see why a lot of people got addicted to the game so much!