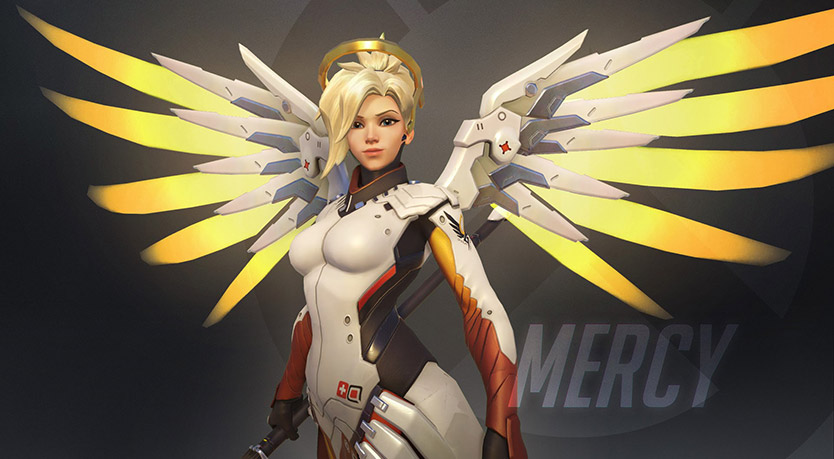 I was going to write about the previous nerf, but then I thought I’ll just wait it out a bit, until they nerf her again, and just write it then (now).

So here we are, at the 4th (I think) Mercy nerf in Overwatch. Of course, when you hear news about any Mercy nerf, you instantly think about her resurrection ability. Well, you’re not wrong, as this one is directly tied to that as well.

As PCGamer reports it from PTR, Mercy’s resurrection ability has yet again been nerfed, and this time they’ve made it so she has a cast time of 1.75 seconds, instead of an instant pop.

More so, while casting resurrection, her movement speed is decreased by 75%, and it can be interrupted by stuns (such as McCree), grips (Roadhog, Orisa), knockbacks (Reinhardt, Lucio), Sombra’s hack, and so on.

Before we go further into the Mercy nerfs, let’s sum up the ones we’ve seen so far:

See the problem here? It’s like whatever they try, it’s still not good enough, but nobody sees the actual problem.

In my opinion, the actual issue is not when she casts the resurrect, or how, but the fact that she CAN resurrect players. As the developers also mentioned:

We feel that Mercy’s recent rework has been successful, but her Resurrect ability still feels too strong and frustrating to play against.

All that’s wrong with Mercy is that she is able to resurrect players, and in a game such as Overwatch, that’s a bit gamebreaking, especially if your team lacks a Mercy.

Playing with or against a Mercy changes the gameplay quite a lot, and even requires picking some hitscan classes (just for Mercy, especially when teamed up with Pharrah) that you might not pick otherwise.

Furthermore, in Arcade games such as 3v3, Mercy is a huge advantage for the team that has her, and with seasonal events left and right, you’re bound to run into her if you want those 3 weekly loot boxes.

Speaking of Arcade games, a great mode for either farming the weekly loot boxes, or practicing heroes you wouldn’t want to pick willingly in a game is Mystery Heroes.

The great thing about Mystery Heroes is that every hero is random, for everyone, and if you die, you respawn as a completely different one every time (sometimes random does mean the same one).

Now let’s take a look at this screenshot:

Not so fun practicing now, is it?

I’m sure you can imagine how that game went. Even though it’s merely an Arcade game mode, there are a lot of players, maybe even more than the ones that play Competitive, who enjoy these games, and having 3 Mercy players in a team is pretty much unbeatable.

Even if Overwatch’s main culprit for nerfs is its Competitive mode, Mercy’s resurrect has undone quite some well earned victories there as well, such as resurrecting a player during Overtime, who has their ultimate ready.

I do understand that this is simply the way Mercy’s abilities are, but nerfing them 4 times now does show that even Blizzard isn’t satisfied with how it works.

I have had Mercy on my team when the other team didn’t, and the other way around, and most of the time it provided such a huge advantage that it was basically a win. Add to that the player skill of whoever is playing Mercy, and if they’re half decent, you’re in for quite a fun game.

Another bad aspect when it comes to having or not having Mercy in a team is the toxicity. I’ve seen more people rage and leave before the game even started, rather than throughout the game, just because nobody wanted to pick Mercy on our team.

Although I don’t agree with that behavior, I do understand the frustration of having her on your side, especially along with a Pharrah.

What can be done to solve the Mercy issue?

Well, as it is right now, even if this PTR change (Nerf 4) makes it to live, I’m sure that eventually it’ll also raise issues with Mercy’s gameplay, and it’ll still not really solve the issue at hand, which is the actual resurrection ability, as opposed to when/how she does it.

In my opinion as an Overwatch player, I honestly believe that in order to solve this once and for all, the Resurrect ability needs to be removed completely. It can be replaced by a lot of other ideas, that DO NOT mean reviving a player in any way, shape or form.

Her healing can stay the same, but the resurrect can be anything else, such as granting a player the ability to fly for a short time, or some movement speed, or a few seconds of immunity.

Her ultimate could either be a double / triple healing / power-up beam, or something among the lines of the abilities I’ve described before.

I’m no game developer, so maybe I don’t know what I’m saying, but I’m sure that if Blizzard were to brainstorm this, they’d come up with something quite awesome that would make most players (if not all) happy.

There are so many more healing classes in Overwatch that can situationally perform even better than Mercy. However, that’s very rarely seen because everyone is so focused on having a Mercy, and quite honestly, rightfully so.

Every time I join a game, I wait to see if someone picks Mercy up first, so I know whether or not I’ll pick her myself, because not having her is almost a team handicap, especially when you play with friends over voice chat.

More so, some players are so convinced that a Mercy is absolutely mandatory, that they pick her regardless of the map, team composition, or their skill level as a healer. While they’re not wrong in most cases, having a poorly performing Mercy in your team is worse than not having one at all, especially if they use her ultimate to fly around and shoot randomly.

All in all, I strongly believe that getting rid of her resurrection ability is for the best, and having it replaced by a different, yet useful, spell can really help towards having different team comps and gameplay. Even so much as adding a new flavor to competitive games.