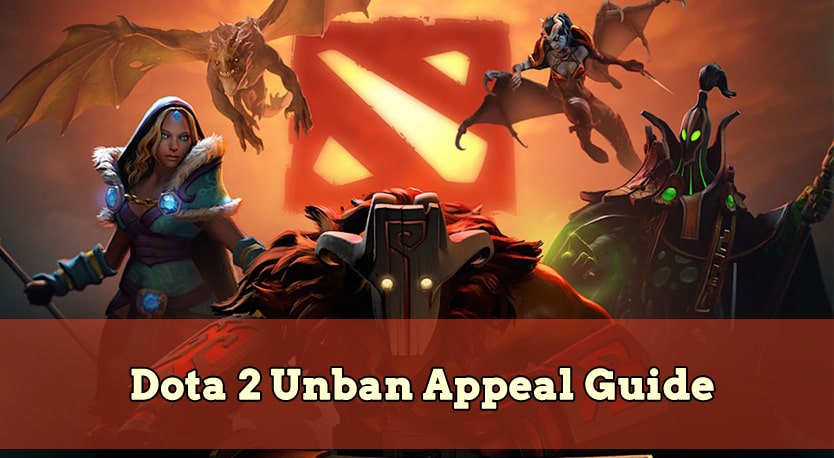 In this guide, we’ll go over how to submit an appeal in order to get unbanned from Dota 2, should you ever find yourself in that unfortunate situation.

Although Dota 2 is not as old as League of Legends, its certainly doing very well for itself by holding its position among the most popular games on Twitch.

Now, as we know with any very popular game, such as PUBG, Fortnite or Apex Legends, developers need to pay close attention to any player or action that could ruin the fun or cause others to get an unfair advantage, and thus, they control that by enforcing their rules and issuing bans.

That being said, having your account banned in Dota 2 can really put a damper on your mood, memories and even friends you’ve made in the game. With that in mind, before we start on our unban appeal guide, we’ll first go over what you should avoid doing which can get you banned from Dota 2!

What can get you banned from Dota 2?

Although unlike other games, there’s no actual Terms of Service page for Dota 2, apart from the Steam Subscriber Agreement, below we’ll go over the most popular reasons for which you can get banned in Dota 2:

Although in some cases the punishment may vary, the usual penalties applied are:

However, even if being banned in Dota 2 for 18 years would most likely be enough of a punishment, that might not be the end of it. It seems that this was the maximum length Valve was able to ban a Dota 2 account for, so in that regard, it might be renewed when it ends, thus being basically a permanent ban.

In some cases, based on a player’s behavior, you might end up with just 6 months of time-off, as confirmed by the Dota 2 team via Twitter:

On top of that, once an account is banned from Dota 2, the phone number associated with that particular account will also be blacklisted, so you’d have to come up with a new one if you ever want to start a new account.

Now that we’ve established what can lead to a banned Dota 2 account, let’s go over what can be done in order to try and get unbanned from Dota 2!

How to Get Unbanned from Dota 2

In order to try and get your Dota 2 account unbanned, you must first submit an unban appeal, which can be sent through two different methods.

Similar to the CSGO unban appeal, In order to appeal your Dota 2 ban from Steam, you must first go on the game’s Support page, here.

Once you’re there, proceed to clicking on “I’m having trouble with items”, followed by “Contact Steam Support”.

This will open up a text area below for your Dota 2 unban appeal, and that’s where we come in handy, should you require our professional and customized Dota 2 account unban service designed to help you get unbanned from Dota 2.

Essentially, this Dota 2 unban appeal is very straight forward. All you need to do is get on Valvesoftware’s contact page here, and complete the fields as such:

Now all that’s left is to submit your Dota 2 unban appeal ticket to Valve through one of the above mentioned methods and wait for them to get back to you!

Hopefully you won’t have to go through having your account banned in Dota 2, but if it does somehow happen, we’re here for you!

We're here to give you the best help in order to get your Dota 2 account unbanned!