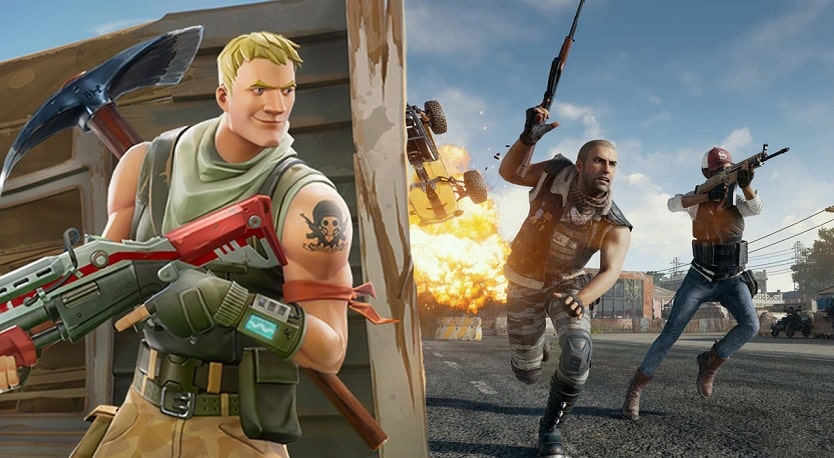 You’d think the Battle Royale genre has died down at this point but it hasn’t…okay, maybe slightly after the Cyberpunk 2077 hype (we love you Keanu Reeves!) but there’s no doubt that both PlayerUnknown’s Battlegrounds and Epic Games’ Fortnite are still one of the most played multiplayer games of the current year.

You thought to yourself, “Hey, maybe I should try a battle royale game so I can stick to the mainstream status quo in gaming” or you just want to see why millions of people are addicted to the formula. And with that, I will give you a tour on both games and to find out in the end which game works best for you. We will look at the system requirements, the game’s optimization, and how both gameplays differ from each other.

Before anything else, you will need to make sure your PC meets the system requirements for both PUBG and Fortnite.

But first, let’s look at the basics of Battle Royale. You may skip this if you already know what’s what in the genre. And, if you’re interested, why not take a look at the history of the genre at the end of this article?

Anyway, here are the BR basics.

Derived from the same formula of the movie Battle Royale by Kinji Fukasaku, the game of Battle Royale concludes when only one person or group is left standing.

Games such as PUBG and Fortnite have up to 100 players while some go overboard like Rules of Survival, summing up to 120 players. However, some games have lesser players but resulting in quicker, more action-packed matches like CSGO’s Danger Zone (up to only 16 players), Free Fire (up to 50 players) and Apex Legends (up to 60 players).

Players are dropped randomly via aircraft – mostly a cargo plane or a battlebus. The players can choose where to land at their own will. Then, these players need to find weapons scattered throughout the map, whether in buildings, large sites or even sewers. These weapon and item drops are random, resulting in unpredictable experiences each time you start a game. But as the game goes on, the safe zone of the map begins to shrink, causing a slow death for anyone outside the safe zone or “ring”. From then on, it’s a fight for survival and you know the rest of the story.

PUBG and Fortnite: A Brief Comparison

For this article, we’ll just focus on these two. To summarize, PUBG leans more on the realistic military simulator type, reminiscing on military games like the ARMA series. It was the game that made battle royale mainstream thanks to the exposure the game got from Twitch and YouTube. It is still the most played Steam game with an average of over a million players every month. On its standard price, it costs ~$30. On the other hand, you have Fortnite which is cartoony but with a unique battle royale mechanic that sets it apart from other battle royale games: building. Think of what happens when an arcade-style shooter mixed with Minecraft’s build system but simpler. Ever since its debut and exposure from Twitch, it has become the world’s #1 battle royale game since 2018. More so, the game is free to play without any paywalls or pay-to-win schemes.

And now, let’s break them down into the finer details.

Yes, both games demand that you have enough memory and visual plus rendering capabilities in order to run them properly. This is an open-world game we’re talking about and that means needing RAM to perform smoothly and a GPU to present the game without looking too jagged.

While the game does look good on its own, the main problem with PUBG underlies with its optimization. Players who even have specs as big as a DDR4 and GTX 2080 Ti still have some performance issues, seeing frame drops as low as 20-30 FPS and slow renders. Even if you put the game on lowest settings, the issues remain present.

While this does happen on multiple occasions, it only occurs on certain parts of the map. PUBG Corp has yet to fix this issue…even after 2 years since its release.

Contrastingly, Fortnite is one of the best-performing PC games to date, especially when it comes to open world. However, this should not come as a surprise since Epic Games made this game – the same company that brought Unreal and Gears of War to the table. And yes, they’re responsible for the Unreal Engine. And with that, Fortnite runs smoothly as long as your PC meets its system requirements.

The game plays as a semi-realistic military game, resulting in rich combat and immersive gunfights. This gives PUBG its identity; the reason people are still having fun with the game despite the optimization issues.

Gunshots are based on bullet drops and velocity which forces the player to rely on analytic skills than whatever is on the reticle.

However, because of its large maps especially Erangel, finding a shootout can take quite a while, especially if you’re the camper type. But if you do find one, every moment is intense.

If PUBG is more like ARMA, then Fortnite is like Call of Duty and Minecraft doused with a bucket of Looney Tunes. As much as the gunplay here feels as solid as PUBG, the biggest feature here is the ability to build in an instant. That means you will need to gather resources with your pickaxe besides trying to survive until the end and gathering weapons.

When firefights break out, players suddenly build up improvised wooden walls and metal stairs to the point where each shootout becomes a mosaic of guns and canvases. Also, the map is quite smaller than PUBG but because of that, encountering enemies is more frequent.

Gunshots in this game are based on hitscans, resulting in more casual gameplay. Recently, Fortnite added the same ping system and teammate revival from Apex Legends.

Even though millions of players fell in love with the game, a lot of players still favor PUBG or any other battle royale since the building mechanics can be a huge turn-off.

Since the gunplay leans more on the realistic side, so does the visuals. Maps look lavish, guns appear finely-detailed and character models follow realistic anatomy. Muzzle flashes look great in dark areas, shadow details are superb and finer details such as footprints and blood splatter add more visual appeal. This makes for a grittier edgier feel compared to Fortnite.

Filled with vibrant colors and cartoony visuals, Fortnite, at some point, reminds us a lot of Team Fortress 2 and The Incredibles. While there is no blood and gore here, the colorful particle effects and flashy looks make it an aesthetic for younger audiences.

We tip our hats to PUBG for creating one of the best gun sounds ever in video games. From the M4 to the .50 Cal, every shot feels powerful and deadly. The echoes from the environment blend in more immersion and the distant sounds of shots from other players make every match somewhat scary yet highly engaging.

The same goes just like Fortnite with the gun echoes and sounds of nature except the guns sound like they come from a golden age cartoon show – and we mean it in a good way, most likely to complement the game’s visuals. The only irritating sounds here are the dances.

Both games have at least a million players each month so that means matchmaking can take only a few seconds. This also means you’ll more or less run into trolls and griefers.

For a long time, PUBG was notorious for its high population of alleged aimbots, wallhacks and speedhacks. While the dev team has done its best to eliminate as many as possible, there are still a few of them to this day. As for trolls and toxic teammates, yeah they’re here. But not as despicable as, let’s say, Overwatch or even League of Legends. Although, you’ll sometimes bump into people who know how to have fun. Roleplayers, memers, those kinds of players; and it makes staying in PUBG always worth your while.

You’ll occasionally run into hackers but they’re not as frequent as PUBG. As for toxic players, well…they’re not technically but they’re pretty loud. We’re talking about kids. Yes, if you haven’t learned by now, Fortnite’s demographic is primarily full of younger players. If you matchmake with them, don’t expect them to become helpful teammates. They’ll mostly just gather resources and play with the build system even if they’re slowly dying out of the safe zone.

Rewards, Skins, and Other Microtransactions

And then of course, you have these. Hey, you need to have some sort of incentives the more you play the game, right?

In an odd way, PUBG’s rewards only involve generic outfits like in real life. T-shirts, jeans, helmets, those are the skins you get in the game and it makes purchasing lootboxes and season passes such a waste of money. Although we do admit the weapon skins are pretty good here.

Rewarding is what Fortnite is good at. With great season passes that include multiple items to unlock including skins, dances, emotes, stickers, pickaxes and loading screens make staying in the game and progressing always worth your while.

In the end the better game goes to… both.

You see, both games have huge ups and downs but they’re special in their own ways. There’s a reason why these two have very loyal fans and its due to the differences in their gameplay.

If you prefer a pure solid shooter experience in a gritty environment, go with PUBG.

If you prefer some shooting mixed with unusual building mechanics in a “happy” cartoony aesthetic, go with Fortnite.

Brian Stone has always been around computers since he was 8. After discovering he had a burning interest in computers, he aims to help the entire community of gamers by dedicating his time and life to help gamers and computer enthusiasts alike. Through his work, he wishes to help readers choose the best products and make the smartest investments.