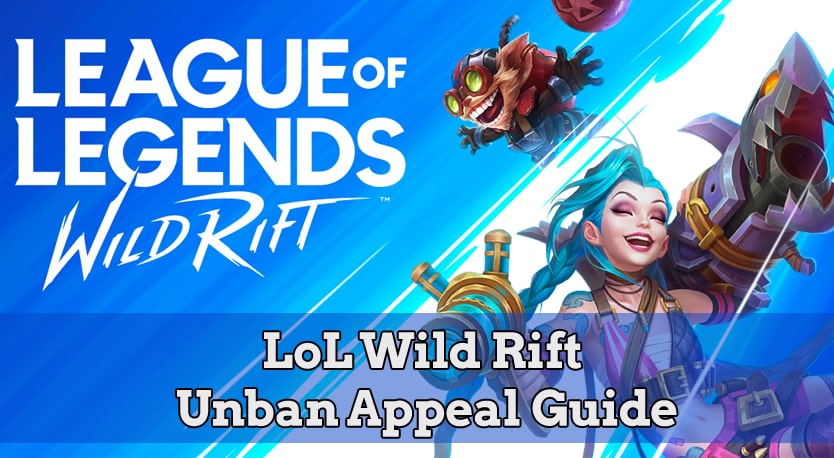 In this post, we’ll go over how you should submit a ban appeal in order to get unbanned from Wild Rift!

League of Legends is one of the most popular online games out there, with a constant and huge player base from all over the world.

Despite the fact that League of Legends can be played on pretty much any computer or laptop, regardless of its specs, Riot decided to bring the game to the mobile gaming audience as well, in the form of League of Legends Wild Rift.

Although League of Legends Wild Rift is a separate game from its PC counterpart, they’re both similar regarding gameplay, although with a few different changes, for example, Wild Rift being a bit more fast-paced.

That said, as with any competitive online game, LoL Wild Rift also takes rule breaking very seriously, issuing suspensions and bans to players accordingly. Thus, it’s best to steer clear of anything that’s against the rules, to avoid getting banned from Wild Rift.

With that in mind, let’s go over what can get you banned from Wild Rift, to ensure you know what not do!

What Can Get You Banned from Wild Rift?

Although ban reasons are generally similar across most games, here are the most common issues for which a player can get banned from Wild Rift:

While these are the most common offenses for which a player can get banned from Wild Rift, as a rule of thumb, you should always stay away from anything you believe it can get you banned, as chances are, it might do just that.

For reference, you can find Riot’s Terms of Service on this page.

Let’s now go over whether or not you can get unbanned from Wild Rift, based on the type of ban you received.

Can You Get Unbanned from Wild Rift?

Although there’s not an answer that can apply to any type of ban or situation, we’ll go over a few ideas as to whether or not you stand a decent chance at getting your Wild Rift account unbanned.

For example, if you’ve been banned for being a bit negative or doing something that other players have considered as feeding and reported you for it, you do stand a good chance at having your Wild Rift account unbanned.

Furthermore, if you’ve been banned from Wild Rift under the allegation of cheating, and on top of that, you believe that nothing you’ve done could’ve been labeled as that, again, you stand a very good chance at having your ban removed.

On the other hand, if you’ve been banned for extreme toxicity, such as real life threats or racial remarks, your chances of being unbanned are slim to none. This is also a situation in which we also can’t help with providing our services.

While toxicity or negativity can be seen as subjective with respect to the circumstances, extreme toxicity and wishing harm on others is a very serious offense, and you should never go down that road, as there’s likely no comeback from that type of a ban.

Last but not least, let’s go over the most important part of this post, namely, how to submit a Wild Rift unban appeal in the unfortunate event where you’ve found your account banned.

How to Submit a Wild Rift Unban Appeal

This process is similar to the getting unbanned from League of Legends one but regardless, we’ll go over it on a step by step process below.

The entire Wild Rift unban appeal takes place on Riot’s official support page here, so make sure to get on it and log into your account. Once you’re there, here’s what you need to do:

Once everything is in place, simply press the red “Submit” button, and your Wild Rift unban appeal will be sent to Riot for a review.

You’ll be notified via your account’s email address when they get back to you, so make sure to keep an eye on it!

That’s all there is to it! Hopefully our guide was helpful regarding your banned Wild Rift account, and if you ever require our help, we’re here for you!