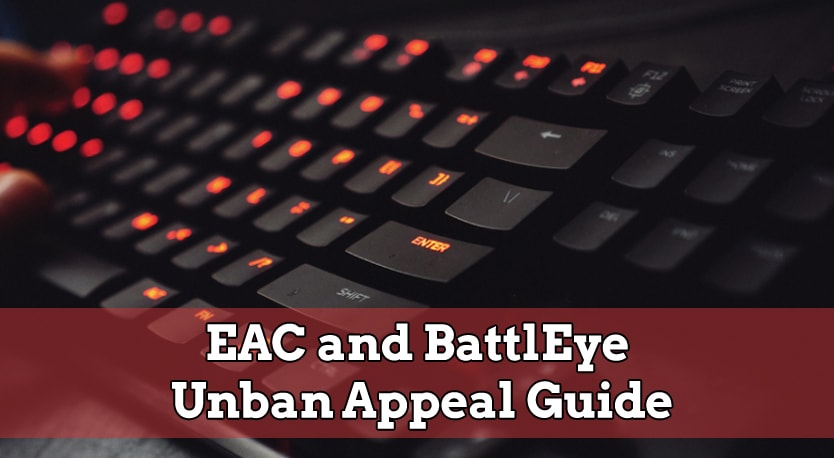 It’s no secret that the more popular and competitive an online game is, the better it needs to ensure its fairness among players and what better way to do that than by using an anti-cheating system.

That said, even though some games and companies have their very own anti-cheating system, such as Warden for WoW or /dev/null for LoL, others rely on the already existing ones, some of the best being Easy Anti-Cheat and BattlEye.

With that in mind, we’ve decided to cover this step by step guide on how to submit an appeal to get unbanned from BattlEye or EAC, should you ever encounter such an issue.

So, without further ado, let’s get down to it!

How to Submit an EAC Unban Appeal

Although multiple games benefit from EAC protection, not all of their bans can be appealed directly via EAC’s website, as for example, both Apex Legends and Fortnite need to be appealed via their very own Support center.

Apart from that, all other games using Easy Anti-Cheat can have their EAC ban appealed directly on the anti-cheat’s website, including games such as Hunt: Showdown, Rust or Dead by Daylight, assuming the ban wasn’t issued by the game’s developer.

So, in the unfortunate event where you’ve found yourself banned from EAC in a game that it protects, here’s what you need to do in order to submit an EAC unban appeal!

Make sure you’re on the official EAC unban appeal form here, which you’ll need to complete as such:

Once that’s filled in, make sure to press the blue “Submit appeal” button underneath the form, and your EAC unban appeal will be sent to their Support for review.

Make sure to keep an eye on the email address you’ve completed inside the form, as that’s how they’ll get in touch with you!

How to Submit a BattlEye Unban Appeal

Depending on the type of the ban, whether it’s been issued by the game developer or through this particular anti-cheat system, games can either be appealed via their very own Support center or by submitting a BattlEye unban appeal form.

Among the most popular games running this protection, both Escape from Tarkov and Rainbow Six Siege can be appealed through BattlEye, assuming the ban came as a result of the anti-cheating system.

That said, in order to submit a BattlEye unban appeal, you must first get on their official Support page here, which you’ll need to fill in as such:

Ensure you’ve read and accepted the Privacy Policy and fill in the Captcha code then you can press the “Submit” button underneath, and your BattlEye unban appeal form will be sent for review!

Don’t forget to keep an eye on the email address written in the form, since once they have an answer for you, they will send it via that particular address.

That’s all there is to it! Whether you’ve been banned from EAC or BattlEye, and based on the type of the suspension you received, you can use the above mentioned contact avenues to appeal your ban! However, should you ever require our help, we’re here for you!

Need help with a banned EAC or BattlEye account?