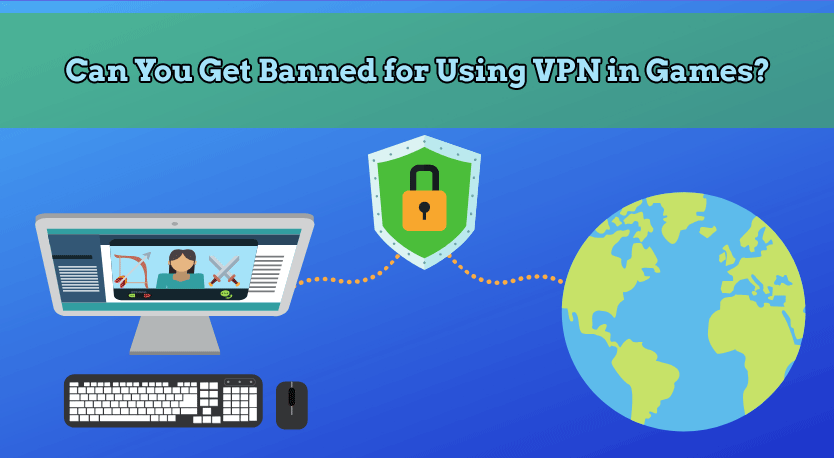 Getting banned for using VPN in games, or at least in some of them, has been something that has been going around for a while now, with everyone having their own opinion based on either rumors or just unfortunate events.

Now, the issue is that VPN usage, especially in games, has been frowned upon for a while now, because some players do use it in order to purchase a boost or share their accounts. However, at the same time, others are using VPN in games merely because of better latency, to avoid ISP networking issues with the game, to be able to listen to certain music streaming software or just because they value their privacy.

That being said, let’s see the stance of some of the most popular online games when it comes to this, and whether or not you can get banned for using VPN while playing them!

Will You Get Banned for Using VPN in WoW?

As we also mentioned in our list of WoW ban reasons, there is a chance you can get banned for using VPN in WoW, although that should be easily solved upon contacting WoW support.

The main concern for why you can get banned for using VPN in WoW is that of account sharing, which is generally used to boost players in PvP or PvE.

However, if you’re not behind a VPN during some extreme fast PvE progression or Arena rating climbing, you should be fine. Although Blizzard doesn’t forbid VPN usage in relation to WoW, they also say they don’t support nor recommend it.

Despite that, I personally been through a period where I could connect safely to EU WoW servers, but not US ones, regardless of what I tried. It was an ISP issue at the time, so I ended up contacting Blizzard about it, and they actually did recommend I use a VPN eventually.

I’ve also kindly asked them to put a note on my account in case some other GM randomly sees me behind a VPN and decides to ban me, and this is what you should be doing as well if you plan on using a VPN in relation to WoW.

And lastly, if you’re also using an authenticator or just want to use your home connection to play WoW, while being behind a VPN for other purposes, you can check out our guide on how to avoid having your WoW account locked due to the VPN usage.

Will You Get Banned for Using VPN in Overwatch?

VPN usage in Overwatch is much more common, and even practiced and endorsed by top streamers, for purposes such as avoiding stream snipers or being able to get into East/West Coast games.

Despite Overwatch being a Blizzard creation, and thus governed by pretty much the same Terms of Use, they tend to be a bit more understanding when it comes to using a VPN for a FPS game. More so, even one of the forum MVPs has said that using a VPN in Overwatch might even help with latency in some circumstances.

Now, there’s a high probability that if you’re not using a static / dedicated and private VPN, which is highly recommended if you want to use one at all, to have your Overwatch account locked under suspicious activity, just like we can see in this Overwatch topic.

This happens merely due to the IP discrepancy caused by the VPN usage, and can be fixed by resetting your Blizzard account password. However, if your Overwatch account was banned for using a VPN, then the only way to have it fixed is to contact Overwatch support.

So, all in all, if you’re serious about using a VPN in relation to Overwatch, it’s highly recommended to use a private one with a dedicated IP and to contact their Support beforehand and let them know.

Will You Get Banned for Using VPN in LoL?

League of Legends is one of the most popular and played games ever made, and more so, you might be surprised to find out that they don’t ban for using VPN in relation to LoL! Pretty cool, no?

This really also makes sense considering League is the type of game you can also play during on a modest laptop during a calm night shift at work, or from a hotel room, and since certain jobs or ISPs block games, using a VPN would be the only solution to this.

However, the same rules might apply, if you end up using a public proxy or free VPN that naturally, a lot of other players might be using it, of which some might do so for the wrong reasons. That’s definitely something that can get you banned from LoL for using VPN, although, if that happens, here’s how to contact Riot to appeal your ban.

Will You Get Banned for Using VPN in PUBG?

Well, this one’s quite easy, as it was confirmed by PUBG Support through this tweet that you won’t get banned from PUBG for using VPN.

This of course, doesn’t also imply that doing other shady things behind a VPN in relation to PUBG, such as using it to purchase the game for a cheaper price compared to your region’s isn’t bannable. Regardless, if you find yourself in need of getting in touch with them, here’s how appeal a PUBG ban.

Will You Get Banned for Using VPN in Fortnite?

I think we’ve all seen the below message somewhere, which also goes to show and confirm that you can and will get banned for using VPN while playing Fortnite!

Of course, this is pretty baffling and a bit unheard of, but regardless, it’s their choice as to what’s bannable or not as per their Terms of Use. Still, that doesn’t discourage players to question this rule on the forums.

That being said, if you want to get in touch with them, you can follow our guide on appealing a Fortnite ban to contact Epic Games.

Will You Get Banned for Using VPN in Pokemon Go?

There’s been a lot of debate on whether or not you can get banned for using VPN in Pokemon Go, in regards to the fact that your phone’s GPS will show a set of coordinates as to where you’re at, while your IP will show a completely different location, specifically that of the VPN. If you do however get hit, here’s how to submit a Pokemon Go unban appeal.

Well, if you’ve been unclear about this, then you’ll be happy to find out that no, you won’t get banned for using VPN in Pokemon Go, confirmed by this reddit post.

Regardless of the VPN location you’re using, Pokemon Go takes only your GPS coordinates into account when checking for your actual location or against spoofing, so unless you’re actually doing that, you should be golden!

However, Niantic did ban a lot of IPs associated with VPNs, especially public and free ones, so if you’re getting a failure to connect to Pokemon Go while behind a VPN, then it’s best to try a private one.

Will You Get Banned for Using VPN on Steam?

Using a VPN in relation to Steam is pretty much in a grey area, as it really depends on why exactly you’re using it.

The only thing that’s clearly stated is that it is forbidden and thus bannable to use a VPN in order to disguise your location to redeem a region restricted gift on Steam, as confirmed on their Support Center.

As for the VAC ban concerns, no, you won’t get VAC banned for just being behind a VPN, although you are risking a permanent ban on your entire Steam account, so there’s that.

There is a bit more discussion on this subject on this Steam community topic, although bottom line would be that it’s not recommended to use a VPN with Steam, as it can get you banned.

We hope our post has helped shed some light as to in which games you can get banned for using VPN or not. And, since you’re here, it’s likely that you’re already considering using a VPN.

It’s very important that if you do end up choosing to play behind a VPN, that you take it seriously, as your game account’s status is at risk, and thus, you shouldn’t risk it by using public or free proxies or VPNs. Those are used by virtually anyone, and in all honesty, a lot of the players who use them, are up to no good.

If you think this isn’t an issue, then consider that a free VPN is, well, free, with a very limited budget and IP range, and you’re likely to eventually share the same IP with a guy who was banned for selling or buying WoW gold, using LoL scripts, boosting in Overwatch or cheated in PUBG. Won’t look good for you, will it?

For that reason, when you choose to use a VPN, you should always aim for a private and paid one. Not only are they a lot more safer, but they also have a lot more uptime, reliability and better ping, as well a Support system in place to help you if you ever experience any issues.

As for our suggestion for the best VPN software is TorGuard (affiliate link). I have personally been using it for about 3 years now, and have purchased an unique and dedicated IP from them, just for myself, which I mainly use to stream certain Netflix shows that aren’t available everywhere, as well as be able to play WoW whenever my ISP would decide to block US realms IPs for no reason.

And, if you decide to purchase a dedicated IP, you should also contact the game’s Support (provided it’s not a game in which you can get banned for using VPN), and let them know that you’ll be using a certain VPN (tell them the IP), and kindly ask them to put a note on your account to avoid having it randomly locked by a different Support agent.